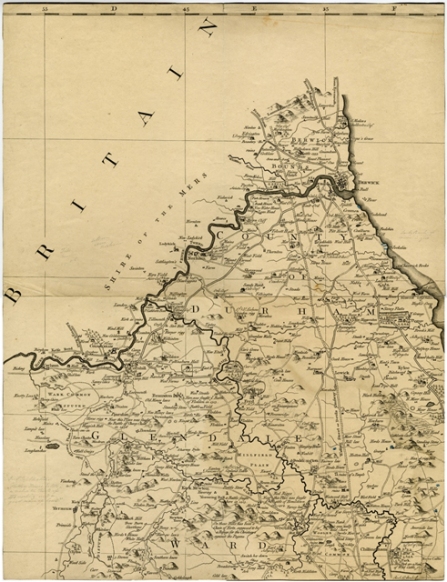 Over the past six months the Museum Archive has been working on project to catalogue and digitise the William Smith collection. Often referred to as the ‘Father of English Geology’, William Smith was a land surveyor and mining expert in the early 19th century. He developed the techniques of geological mapping that are still used today. 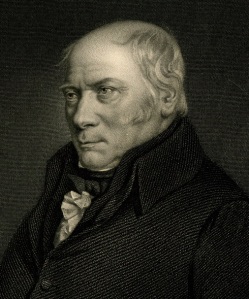 The Museum’s collection came from Smith’s nephew, John Phillips, a geologist and first keeper of the Museum. It contains Smith’s notes, diaries and correspondence, as well as a large selection of geological maps. While digitisation projects are always complex, Smith’s maps have presented some challenging problems, including the fact that a number of them have been cut up into small pieces!

Recently, work-experience students Matthew and Alex (hiding under his hat in the photograph) helped to sort out Smith’s maps of Yorkshire and Northumberland, which were stored as a large number of rectangular pieces. Both were likely cut up by Smith himself, or his nephew John, to use in the field. 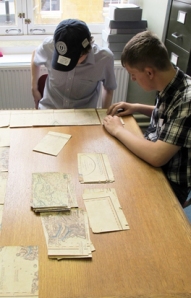 Matthew and Alex were quick to catch on to the best technique for sorting a map- do the outside pieces first, just like a puzzle!

Large and detailed maps were necessary for the type of surveying and geological work undertaken by the two men in the early 19th century, but such documents were unwieldy to carry in their original format. Folding the map was also not a good idea, as the folds would wear quickly and tear, making it impossible to read along the tear lines.

Instead, maps would be cut into a number of small pieces and mounted to linen. This allowed the map to be folded to a nice portable size without wearing any section of the map. It looks as though Smith and Phillips never got around to mounting these.

Once the map was sorted into its original order, the students scanned it with the help of our collections assistant and digitisation expert Sarah Joomun. Even after some quick work we can see that the techniques used to recreate the map as a single piece were quite successful.

All of Smith’s maps and a large number of his notes and documents will be available online early next year, with the launch of the Archives’ new online catalogue. This work is being completed thanks to the generous funding received for this project by Arts Council England.