This week, Darren Mann, the Museum’s Head of Life Collections, is at the International Conference on Alfred Russel Wallace in Sarawak, Malaysia. He’s speaking about the Oxford’s Wallace collections, alongside other Wallace experts and enthusiasts from across the globe. 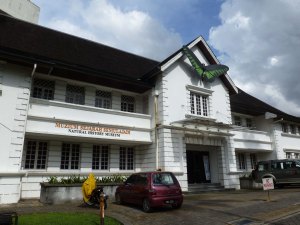 The conference takes place at the impressive-sounding Riverside Majestic Hotel in Kuching City, Sarawak. Wallace’s ‘Sarawak Law’ is the name of one of his first publications on evolution, so the location is important. Wallace did some of his most important work in what was then known as the Malay Archipelago, so for a naturalist like Darren, it provides an opportunity to walk in the footsteps of one of his heroes.

Darren has sent a couple of brief reports from Malaysia, along with some photos from his trip so far. He spent a satisfying afternoon in the Sarawak Natural History Museum, courtesy of Dr. Charles Leh Moi Ung and assistant curator Mdm Wong. Darren loves dung beetles, so he helped to re-identify some of their dung beetle collection. He said “They had more Paraphytes (cool genus of dung beetle) than I’ve ever have seen before. They’re the same species Wallace collected in Sarawak all those years ago.”

Wallace will certainly have encountered some difficult weather conditions on his adventures in the Malaysian jungles, so it seems appropriate that Darren has arrived in the middle of the rainy season. In his words “It’s raining a lot!”.

We’re all sending Darren a lot of good luck across the world as he represents the Museum in his talk tomorrow.

And so ends Wallace Week. We’ve looked back in time to remember and celebrate one of the greatest naturalists of the 19th Century and we’ll end on how his legacy will continue to inspire the scientists of the 21st… 22nd… 23rd…?

1 thought on “In Wallace’s footsteps”