We couldn’t just tease you with last week’s shot of the Iguanodon being unwrapped. The sight of our enormous dinosaurs being liberated from the foam, tape and chip board which has encased them for the past year is too good not to share.

Each time I look out into the Museum court, another specimen has been revealed. The elephants are back, the camel is looking great and the giraffe is next on the list. But the biggest impact over the last couple of weeks has to be the large dinosaurs regaining dominance in the centre of the Museum.

The T rex and Iguanodon skeletons are far too huge to move… and wouldn’t even get out of the front door! So they had their own bespoke wooden boxes built for them, which protected them from damage and dust during the roof restoration project.

But with just 3 weeks until our re-opening, the boxes are down and the foam wrapping has been discarded. Here are a few of my favourite shots of the return of the dinosaurs. 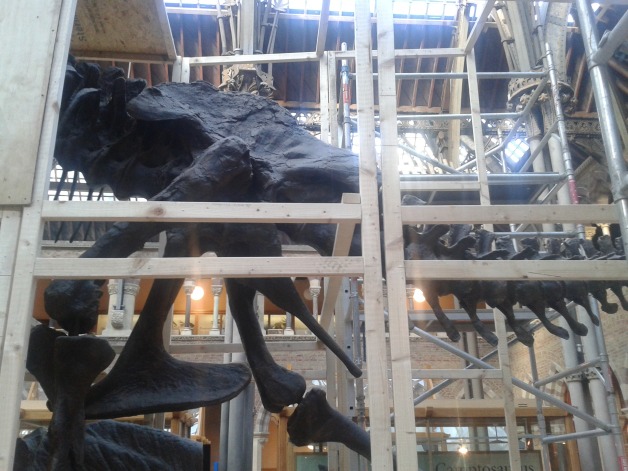 The Iguanodon’s tail escapes its box

Our dinosaurs are ready and waiting for the visitors to return on Saturday 15th February. We all hope to see you then!