This week’s What’s on the van? comes from Darren Mann, assistant curator of the Museum’s Hope Entomological Collection.

Most butterfly enthusiasts would easily recognise this as the Bath White (Pontia daplidice), however, when this particular specimen was captured it was known as “Vernon’s Half Mourner”, after the first recognised capture by William Vernon in Cambridge during May, 1702. In fact it is this very specimen that Vernon caught and as such it is regarded as the oldest pinned insect in the world, and certainly one of the iconic treasures of the Museum. 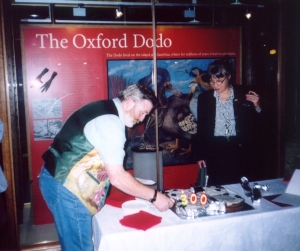 In 2002 we marked its tricentenary with a birthday celebration, including of course, a butterfly-shaped cake!

The Bath White is not a native species in the UK, naturally occurring mostly in the Mediterranean region, but like many white butterflies, it migrates North in spring. Very occasionally it reaches our shore as a vagrant, and while in 1945 over 700 butterflies were seen, since 1952 less than 25 individuals have been recorded. Unfortunately even if they managed to reach the UK in enough numbers to breed, British winters would most likely wipe them out.

Like most of the white butterflies, the caterpillar of this butterfly eats cruciferous plants, though it’s very unlikely to eat your cabbages, as it prefers wild species such as hedge mustard and the various mignonettes.

Find out more about butterflies here: